The Coverage on Women’s Sports or Rather the Lack of 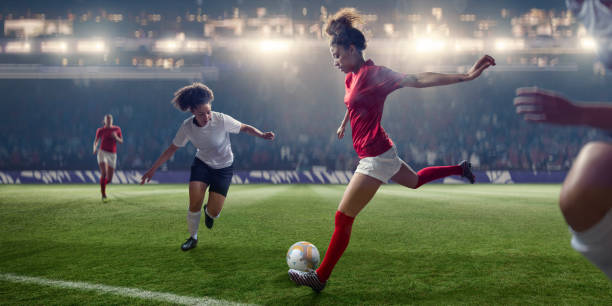 Whether or not we have reached gender equality has always been a topic of discussion; have we reached a point where we can say men and women are regarded as equals? Progress has been seen in many areas, but there is a lack of progress in others, with women’s media coverage in sports being one of them.

Today we continue to see apparent differences in how women are referred to in the media. In the 2021 Tokyo Olympics, the U.S. sent 284 men and 329 women to represent; 58% of the women won medals. Commentators were often heard using female-gendered references 13.6% of the time compared to 2% for men. According to, Overlooking her shot: Women’s sports need an assist as coverage remains the same as 30 years ago, from Purdue University women’s sports receive the same amount of coverage as they did in 1980, they also bring up a point in which they believe that lack of sports coverage for women can discourage young girls from participating in sports, depriving them of role models to look up to as they grow up—overall depriving them of their well-deserved media coverage.

Another issue brought up when speaking about women in sports is their portrayal. When women are covered in the world of sports, broadcasters tend to make references to a woman’s age, appearance, and family life. Just Women’s Sports states that “They found 29 instances of gender diminutive language, with ‘girl’ being used 21 times, ‘lady’ six times, and ‘chick’ twice.” Men in sports do not receive the same commentary. The comments focus on their strength and how valued they are as athletes. Why do women receive these types of statements? Female athletes who work just as hard do not receive the same respect and portrayal.

Purdue University reports that “In the 1980s and ’90s, (…) women athletes were generally subject to trivializing sexualization or humor; this shifted in the 2000s when athletes were typically framed as wives, mothers, and girlfriends. Both approaches diminish perceptions of the athletes’ abilities and conform to heteronormative roles and expectations.” Although progress is evident, there are still hints of misogyny and inequality for female athletes. These statistics show that even after years of  “progress” towards gender equality, issues continue to weigh down on the progress.

Female athletes deserve the same quality of media coverage as men do. It is not a question of whether they have earned their story or their news coverage; it is simply a right and step towards true gender equality.