Abortion Rights in Danger for Millions of Women in the U.S 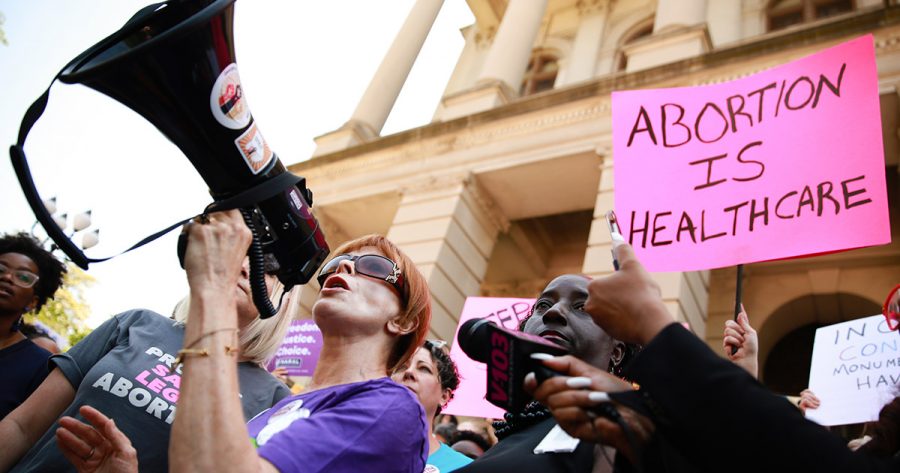 After the death of Ruth Bader Ginsburg on September 8th of this year, a seat was left empty on the Supreme Court. This put Roe v. Wade in danger.  Millions of American women may lose their right to safe abortion procedures.

So what exactly is abortion? Although many may know it in more simple terms as “ending a pregnancy,” there is much more to it than many may think. After interviewing Anaheim High Schools’ science teacher, Mrs. Shamrell, it became evident that abortion is more complex, “ There are a variety of different kinds of abortions. In general, any abortion is either called an interruption of pregnancy or pregnancy termination. Sometimes they can happen naturally. As a matter of fact, miscarriage is called a spontaneous abortion. There is a therapeutic abortion that is when a doctor might perform an operation that stops a pregnancy. So basically, abortion means the end of a pregnancy.  When we talk about that as a societal issue, usually what we are talking about is what we would call elective abortion, that’s when the women herself chooses to stop a pregnancy, so when you just say abortion, scientifically, that could be a lot of things but when we are talking about this topic what we are really talking about is elective abortion when your choosing to stop the pregnancy.”

Mrs.Shamrell explained that a spontaneous abortion, otherwise known as a Miscarriage, could occur for various reasons. This could include trauma to the mother, health issues, genetic issues, and even mental trauma. There are also therapeutic abortions, which Mrs. Shamrell informs us could be a result of many different factors, “ When either the health of the mother is at stake (…)  the mother might have problems with her heart rate there may be a danger that a continued pregnancy could lead to a stroke for the mother. There could be a problem with the baby that leads to an infection. There could also be problems with the fetus itself in that maybe there’s a variety of conditions where the fetus is not developing properly.” She explained that genetic problems sometimes cause the development of the fetus to come to a stop. This could lead to severe deformities when the child is born.  “In some cases, the parent will choose to go through the entire pregnancy and have that baby knowing that it’s not going to live very long at all whereas others would prefer to stop that pregnancy and therefore they would have a therapeutic abortion, and then that baby would not ever be born at all. So there are a wide variety of reasons why a pregnancy might be stopped besides just the choice of the mother.”

If abortion is made illegal, we may see an increase in women’s health issues and deaths based on past events. Primarily for low-income women. According to an article on Guttmatcher.org, the demographics for abortion showed that “In 2014, three-fourths of abortion patients were low income—49% living at less than the federal poverty level, and 26% living at 100–199% of the poverty level.” In other words, this means that it would have a disproportionate impact on low-income women and people in our community.

Mrs.Shamrell expanded on this by stating that, “What we have seen in the past, is when abortions are not legally available, then women are more likely to seek illegal abortions, and those would not be done in a proper scientific, sterile hospital, doctor type situation, it would be something outside of that, and that could be very dangerous to the mother in that she is not being monitored by doctors and if something goes wrong then there could be a problem. The other thing is that if she is doing something illegal (referring to back-alley abortions), she’s probably more likely to hide it. So if there are complications, she’s probably not going to go to the doctor and tell them about it because then she could get in trouble for doing something that was illegal.”

Although many may view abortion as either right or wrong, there are many instances where it may be crucial to a woman’s health. Mrs.Shamrell discusses what other factors could come into play in this situation, “The other thing was that I found some information from the American Psychological Association and they had done a summary article where they were looking at research and looking at the idea of a woman not being able to choose an abortion and being forced to go through an unwanted pregnancy that that could definitely have detrimental effects not only on the mother but also on the child when it’s born as well. There are situations where having to go through an unwanted pregnancy would affect the mom mentally and psychologically. The other suggestion that has been brought up is that if a woman is in a dangerous situation where maybe she is being abused, and she gets pregnant if she has to continue with that pregnancy, she may not be able to get out of that bad situation because she is too dependent on staying so those are some different situations that could affect a woman. I mean, pregnancy itself can be dangerous. Not every woman has a nice healthy nine-month-long pregnancy, some are very stressful and very hard on the mother’s body, and so if she was not allowed to choose abortion, then those could be problems as well.”

Ms.Majewski, a history teacher at Anaheim High School, spoke to us about the historical background of the case, “ The right to abortion came about because of an earlier decision that granted people the right to birth control. In 1965 there was a very famous Supreme Court case called Griswold v. Connecticut, and in Griswold, Planned Parenthood tried to open a claim where they were going to give out birth control while there was a law in Connecticut that said you can’t do that. (…) It gets up to Supreme Court, and Supreme Court says, hey, there’s a bunch of different amendments in our constitution that if you take them all together, they guarantee a right to privacy, and under that umbrella of privacy is marital privacy. The right of married couples to make decisions themselves about whether or not they want to have kids; so they basically said that its because it’s invading the right of these couples to decide if they want to have children and then a couple of cases later, the Supreme Court said hey you don’t even have to be married. They extended that to unmarried couples, basically saying birth control is not the government’s business. Now the reason why I bring that case up is because that’s a precedent case, which means that when the Supreme Court made their decision in Roe v. Wade, they based it on the decision they made in Griswold v. Connecticut because of what they said … in Roe. The right to abortion falls under the right to privacy, so it’s a private decision between a woman and her doctor. That’s what they ruled in Roe v Wade. “

If abortion is made illegal, it will not only impact women but other communities as well, most notably the LGBTQ+ community. As Ms.Majewski explains, ‘If Roe v. Wade is overturned, then other cases that have been won using this same line of reasoning will also be affected since it may lead to the Supreme court rejecting that line of reasoning for past and future cases. Of course, this also means that there is a possibility that birth control could also be affected by this since they may be able to connect it to the original case, Griswold v. Connecticut.”

In El Salvador, where abortion was made completely illegal in 1998,  there has been an increase in women’s imprisonment who have had abortions. Most women arrested are low-income women. Many of these women claim to have had spontaneous abortions.  Ms. Shamrell reminded us that this could be due to malnutrition, among other factors tied to poverty. Mrs.Shamrell explains that although she is not certain, she believes that it would most likely be complicated to prove whether the disruption of the pregnancy was spontaneous or not. However, there could also be the possibility that an examination could prove otherwise if there is any proof of damage to the reproductive system. Although none of this is certain, it does seem to be a difficult procedure to prove. El Salvador is a prime example of what women fear will result in the U.S.

With the confirmation of Amy Barret, Ms.Majewski indicates that abortion rights will be even more at risk, now that they may be able to argue that the Constitution does not protect this. This means that it will fall on states to decide to ban it, place more restrictions, or allow it.