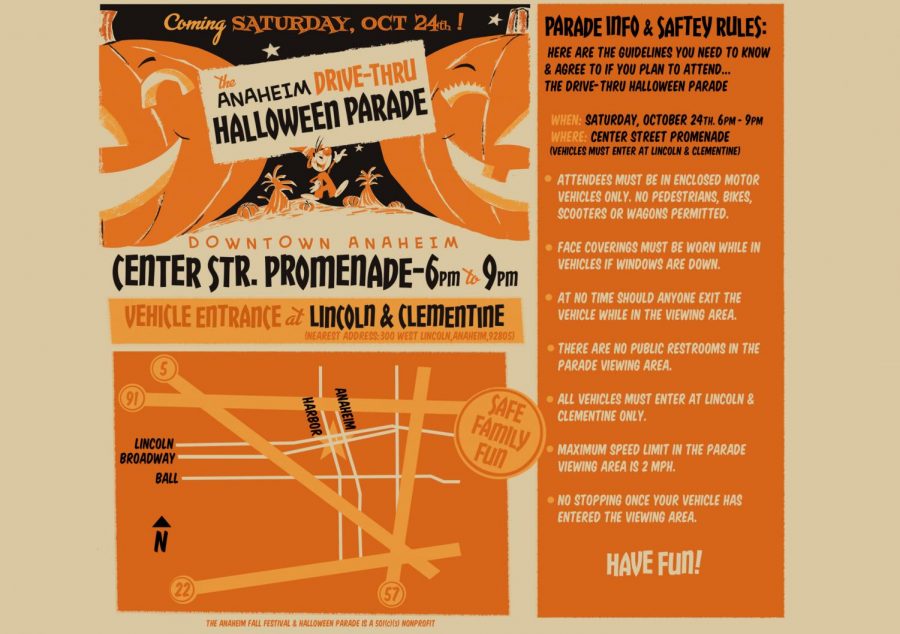 This image was from the official Anaheim Fall Festival and Halloween Parade website which showcases the guidelines that need to be followed in order to combat any spread of Covid-19.

Every year on Halloween, the city of Anaheim holds the Anaheim Fall Festival and Halloween Parade. Due to the complications of Covid-19 and the precautions that need to be made for the safety of the citizens of Anaheim, changes were made to the festival and parade.

Since the festival held many booths, contests, and activities to enjoy, it was safe to say that the festival was usually crowded with guests every year on October 24. The solution to this predicament was to have the festival online for the entire month of October instead of just one day.

As for the parade, the city of Anaheim decided to have its first-ever “Drive-Thru” Parade on October 24th. This decision was made to prevent any close contact with other individuals who could potentially spread the virus. This solution was a way to take proper precautions while still providing fun during these difficult times.

The Drum Major this year in the Anaheim High School Band, Robert Nava, states, due to the possible lack of live performances by school bands, “I expect to see less live performances since at this time most people may not perform in order to reduce spread. This can be problematic for the reasons that live performances are so much more entertaining.” He goes further into the topic, “I think artwork being displayed would be pretty interesting but it’s not exactly what you’d be expecting from a parade of this kind.”

As of now, The Anaheim Fall Festival and Halloween Parade website allow the public to see what will be featured in every virtual booth every day of October. In regards to the Parade, however, not much information has been posted besides safety guidelines to ensure that the parade goes smoothly. Dannaee Corona, “It is difficult to determine what ideas they have planned since the virus limits them from doing many things.” The citizens of Anaheim have to wait and see what the city of Anaheim has planned for the parade on October 24th.