Every Person has a Story: This is Maegan’s Story 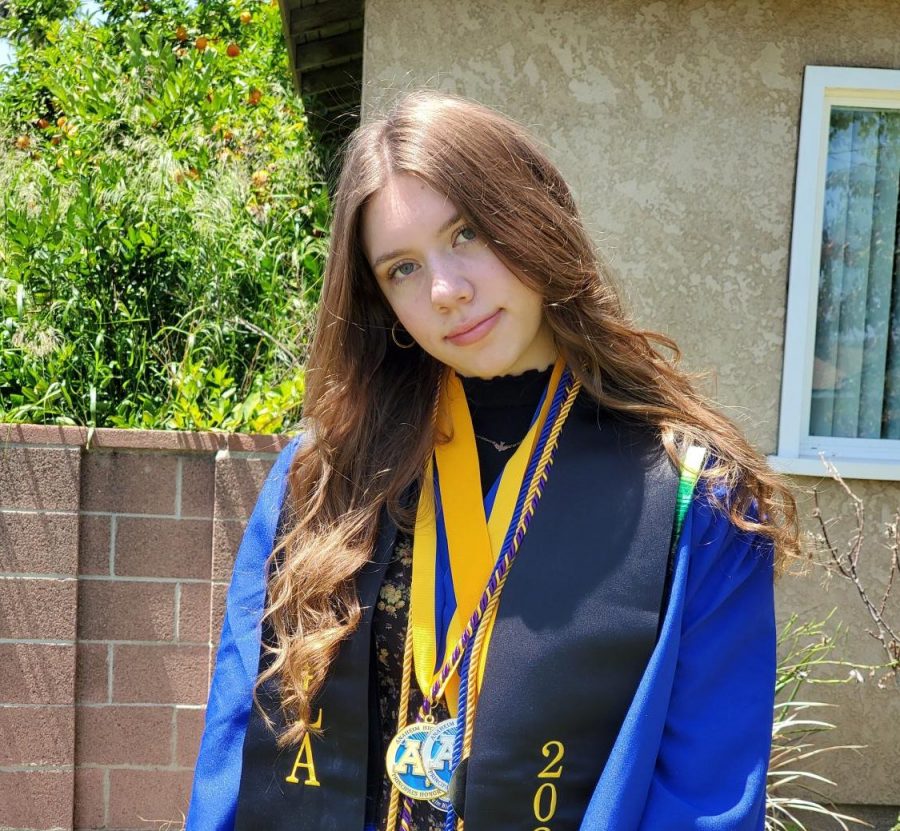 As we are coming to the close of a very monumental year, it is important to highlight and recognize one very special senior: Maegan Davis. Her educational life was very full, and she has left behind an astounding legacy. The journey began with her desire to become bilingual, so in Kindergarten she joined the Dual Language Academy (also known as DLA). She faced many adversities such as having to learn Spanish by herself because no one in her family spoke Spanish. Unfortunately, some teachers were prejudiced and consistently thought she didn’t have what it took to learn Spanish. Maegan being Caucasia at times felt bullied, but none of that stopped her enthusiasm.

During her four years in high school she has been in advanced choir. In her freshman year she was part of “Las Sirenas,” advanced girls’ choir and in her sophomore year she joined Chamber Choir, which is the most advanced category. In her junior year she was the Choir’s Fundraising Chair. During her senior year she became a choir representative. Maegan shares about her experiences in Choir, “I’ve never really been a brilliant singer but growing up in choir taught me about hard work, teamwork, and passion. It taught me how to be a better musician and how music can help so many people in different ways. I made some of my best friends in choir and the choir room has been like my second home for the past 6 years.”

She also enjoyed tutoring her friends all the time. During her sophomore year, she helped out her entire math class because she was good at math, so her teacher asked her if she would like to teach his class the following year. She spent a couple days a week planning lessons to teach the class during junior year. “I just loved planning the lessons and getting to teach the students by myself. Sometimes it’s easier to learn when you’re being taught from a student’s perspective and I got to help with that. It’s what made me realize I loved teaching.” She always takes time to help and support other students, that is something admirable!

Since she started high school, Maegan attended an early morning seminary class.  The classes were daily and started at 5:50 a.m. She did this for four years. We wanted to know how she dealt with that, “It was hard, especially my freshman year because I had 9 classes every day. I had to wake up super early to go to my seminary class, which was at 5:50 am every morning. It caused a lot of stress and anxiety, but it got easier as time went on. My senior year was kind of hard too because I took college classes after school. I would get out of college at like 10 at night, have to go home and do all of my homework and then wake up again to get ready for my 5 am class.”

She took five AP classes in total during her four years in high school: AP Human Geography, AP European History, AP Spanish Language, AP English Language and AP English Literature. As we know for every AP class, you have take an exa at the end of the year. Which means she took five AP exams during high school. Many people doubted that she would succeed in her endeavors to learn Spanish her because of her background, but instead of letting that hurt her, she pushed herself to work harder and she proved them all wrong by getting a 5 on her AP Spanish exam. Also, this year she was recognized by her teacher Mrs. Gracian as an “Most Outstanding Writer.”

Personally, it was a pleasure to meet such an outstanding person and student as Maegan Davis is. She proved to us that nothing and no one can stop you from doing what you want to do. It would be great to recognize her as an Anaheim Colonist. She will leave a mark on Anaheim High School for her extraordinary effort and never giving up despite the obstacles and challenges that came her way. Keep doing what you are most passionate about and never let people tell you what you can do or what you cannot do. I wish you good luck in your fresh beginning going to Brigham Young University in Idaho to become a teacher.