The Android vs iOS Rivalry 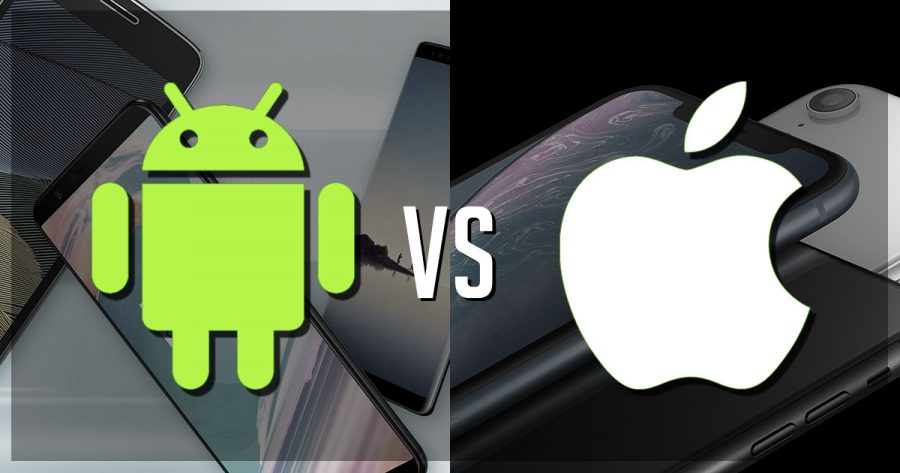 Two big rivals, Apple and Samsung, have competed to make some of the best smartphones to date. The dream of making the perfect high-tech smartphone through Android and iOS. Our community is inevitably debating on the competence of these smartphones.

AE News conducted a survey asking AHS students which of the two rivals they prefer. Unsurprisingly, Anaheim students picked the iPhone as their preferred choice.

The correct former term for iOS is the iPhone OS, which is a mobile operating system for Apple-manufactured devices. iOS runs on the iPhone, iPad, iPod Touch, Apple TV, and Apple Watch. Anyone can think the iPhone is the No. 1 mobile OS globally, but that’s not the case. Although, iOS dominates the North American market by a large margin, with a 60 percent market share as of May 2010.

According to our survey, 82.6% of the students prefer iOS better than Android. One of the common things mentioned by our students in this survey was about the iPhone camera. When we talk about the camera, the responses are the same “I like Apple better because it has better camera quality.” iPhone also provides many interactive and fun applications for their smartphone. Like I said previously, one thing that fans like about the iPhone is the camera, which has an application called “AR Emoji.” Basically, with this app, you can personalize your emojis with your face, which is that’s what most of our students responded: “The emojis and camera quality is better.”

The operating system created and developed by Apple Inc. is exclusive to its hardware. Our students mentioned how efficient and easy-to-use iPhone is, “I feel that they are more resourceful, and it helps you get information faster that is factual.” “iOS because it looks sleeker, and the technology is better and faster. The iPhone is expensive, but it is worth getting with all the features, and it is more secure against a virus trying to enter the phone.” Another responder to our poll shared, “I chose Apple because I like how user-friendly it is. Its menus look more organized, and I like how nice they are built, and their software isn’t so bad.” “Because I feel like it’s safer and more secure,” that description is for iOS. Those were examples of what our students think about the iPhone. The only disadvantage is that not all our students can afford it.

17.4% of our students prefer Android, and we will find out why they prefer Android better than iOS. Before we start, it’s important to know a little about Android.

Android is a mobile operating system developed by Google. One difference between Android and iOS is that Android is an open-source, meaning developers can change and customize the OS (Operating System) for each phone. We know Android is an open-source, and It depends on the users and how they use smartphones to avoid getting a virus or hacked. Besides the operating system, Android has a lot of interactive things to do and make. Like iOS, Android has the AR Emoji application, a good camera quality, an open-source system, and many interactive things. Although a few students prefer Android, each opinion matters. One Android user said, “There are many reasons Androids are better. Some are more affordable. You get hacked less. iPhones are just a waste of money.” Another student responded, “They are less complicated.” “Because security isn’t as annoying as it is on an apple, they have a fair price, and I can download a lot of APK files off of the internet because there isn’t apple security monitoring you every second.” In this quote, we can see how the operating system is why this user likes Android. “Android because it has a longer battery life, and its screen doesn’t crack or shatter as easily. It might not have the best camera quality I still prefer an android.”

In our survey, we can denote different ideas from students, but that does not mean that some are correct, and others are not. This student is one of many examples, “I don’t need a logo to make me proud. Some people are always upgrading their phones once they come out and make a huge deal about it, and that’s not me. I just want a phone so that I can communicate with others, and that’s it. Also, the low key doesn’t trust apple, but then again, what can you trust?.”

In conclusion, every person is free to choose whatever smartphone they want and can afford. Some students or adults have a phone or smartphone for the basic need of communication. Both of the smartphones, either Android or iOS, are significant technological advances.