Anaheim High School was founded in 1898. Therefore, it is the oldest school in the Anaheim Union High School District and the third oldest in Orange County. It’s walls hold a lot of secrets and it is said to be home to many unexplained events. 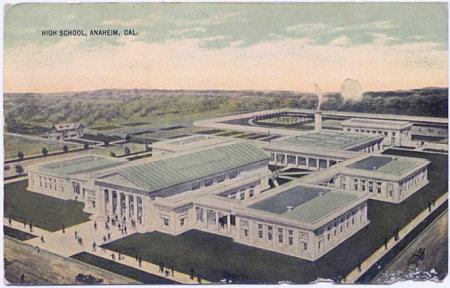 Anaheim Exclusivo set out to contact staff members who have experienced paranormal activity.  Our team focused on interviewing staff members and students who stayed after school and time investigating the main building, labeled as the most haunted spot in school by a paranormal investigator. We interviewed Trina Romeros, the campus safety aid, and she told us about one of the strangest encounters she has had.

She explained that her encounter happened on a Sunday morning when she was returning chairs and tables to the auditorium after borrowing them for a personal event. That morning, her brother helped her carry the tables to the auditorium because they were too heavy for her to carry them herself.  They entered through the side door, and to their surprise, there was a push broom standing straight up in the middle of the aisles of the auditorium. She recounts that they immediately walked up to the broom and performed a swiping motion over the end of the broom to see if any mechanics were holding it up, but there were no strings attached to it. Her brother kicked the broom down and it fell flat. “It was the weirdest thing because if you ever try to stand a broom up by itself, it is not going to do it,” Mrs. Romeros explained. After trying to stand the broom back up, it would not stand up by itself anymore. Clearly, to her, this event was beyond explanation, and her co-workers were also astonished at what they witnessed. They all believe a force beyond human understanding was holding the broom up that morning.  Aside from this, Mrs. Romeros told us that last year she entered the main office at about 6:30 am and heard someone clear their throat. Her immediate thought was“Wow, she is up early,” but when she turned the corner, the room was empty. However, the chair at the desk was pulled out differently than how the custodians had left it the night before.

Anaheim Exclusivo continued to interview Mrs. Romeros, and she revealed many secrets about the school.  Among those, she mentioned that there are several underground tunnels in school. She explained, “There are so many things, like down here there’s a tunnel, in the cafeteria, there’s a tunnel and that tunnel leads to the church.” She specifically brought our attention to one located under the stairway outside the auditorium.

Priscilla Rodriguez, another campus security aid, also experienced a thrilling event.  Rodriguez was leading an on-campus suspension when she took the students to a room located under the pep stage. That afternoon, the doors were locked, so she had to contact one of the custodians to open up the door. However, when Julio arrived to unlock the door, they both heard voices and noises from within the room. He asked her if anyone was inside, and she told him that nobody had gone in, that they had been waiting for him to open the door. As the noise continued, he turned to her with an idea: “Wait here, I am going to go to the other side of the pep stage and when I unlock that door they will come running out through this door and you can catch them.” After opening the door, her coworker radioed her and asked her if anybody came out. She responded with a no, and once they went inside, they scanned the room, but it was completely empty. However, all the desks were up against the wall and were stacked on top of each other. Julio told Priscilla that as he was walking down the hall and inserted the key in the hole, the noises persisted until he opened it. “I do not know how you can have on-campus suspension in here,” he told her. That afternoon, the students that were present helped Priscilla arrange the desks back into their original formation. Rodriguez recognizes that the event was one of the oddest things she has ever experienced. However, this is not the only one. She told us that sometimes during the day, she sees a lady dressed in a white dress, but she can never catch her.

After speaking to several staff members, some say that they have grown accustomed to the activity in the school and that it does not stop them from doing their job. But that at the moment of the occurrence, the events were certainly frightening.  Along with these staff members, others have experienced eerie events. Their stories can be found in the book Anaheim’s Dead: Ghostly Encounters With The Passed by Tom Zaradich.